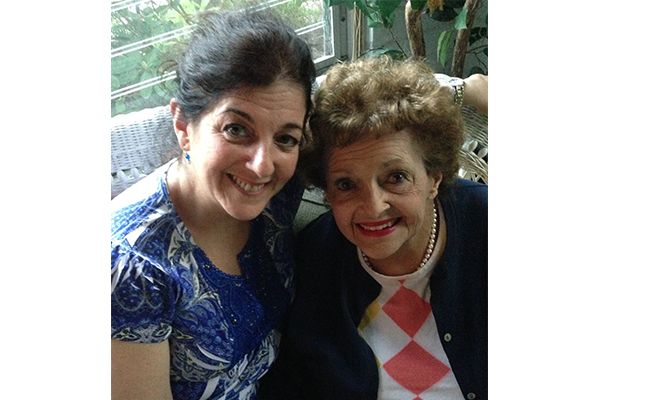 I lost my mother, Thea Eichler, on July 15th. She had reached her 90th birthday last March, a milestone I know she never expected to reach. My mother’s parents both died young, so she didn’t think longevity was in her cards. When I was about to graduate college and considering a teaching position in Arizona, she blurted out “You can’t move out west, I might die!” My younger self tried to make sense of this extreme reaction. Had my mother just dealt me the ultimate Jewish guilt trip, or was the trauma of losing her mother before her 21st birthday making an appearance?

I adored my mother and I was fortunate to grow up feeling loved and respected and
appreciated by her throughout every stage of my life. That is a gift that keeps on giving.

When my father passed away in 2007, a part of my mother died along with him. She was never the same after she lost the love of her life. In the last few years vascular dementia stole my mother’s brilliance and sophistication and most recently, her will to live. You can say I’ve been missing my mother for quite some time.

My siblings and I knew our mother was dying. She’d been in hospice care for many weeks, so when the doctor called me on a Tuesday morning and said this is it, I gathered my siblings and we stayed by her bedside for 5 days.

What does any of this have to do with organizing? I have several take-aways to share.

1. Since order and preparedness have a calming effect on me, I did a quick Internet search for a checklist of what to do when a loved-one dies and found one on preparing for a Jewish funeral from ReformJudaism.org and printed it out.

Many of the tasks did not apply to us, or they had already been accomplished, so I
crossed them out. Some of the tasks I modified to fit our family and situation. I shared the revised checklist with my 4 siblings so we were all on the same page and divided up the tasks. Five days later when my mother finally passed we were able to just be and experience our feelings. So many decisions and actions that needed to be tended to were already done. Thanks to the checklist, the clergy had been notified and the funeral arrangements had been made, the obituary for the newspaper had been written sans a date, the outfit and jewelry had been set aside, the list of who needs to be called had been brainstormed and delegated, the decision of who will host Shiva had been decided and funds had been set aside to cover funeral expenses and more.

2. As a co-executor of her estate and a Professional Organizer, it made sense that I would lead the charge of cleaning out her apartment. This is a job I’ve handled many times for clients and I knew that with my family’s help, we could accomplish the task efficiently and in a timely fashion. What I should have expected, but didn’t, was how sad it would make me feel. I was so busy being the Organizer that I forgot I was the Daughter. The bags and bags of clothes in my trunk being dropped off at Goodwill weren’t someone else’s . . . they were the outfits I watched my mother wear for years and associated with happier times. The trash bags bulging with personal items being tossed in a dumpster weren’t someone else’s . . . they belonged to my mother. A colleague who lost her father earlier in the year gently advised me right after my mother passed to take time for myself, even if it meant doing nothing more than cuddling under a blanket in pj’s with a soothing cup of tea. The last day of the apartment clean-out after we walked away, I felt completely depleted and gloomy. I went home at 3:00 in the afternoon and put on my pj’s and my mother’s panda fleece (a special clothing item I coveted), made a cup of tea and stayed on the couch for hours. I felt much better after that.

Preparedness helped my family and me a great deal. It enabled us to be in the moment and “feel all the feels” without scurrying around dealing with the stress of last minute details and arrangements. And while our mother’s passing was a relief on many levels for her and for us, it’s never easy to say goodbye.